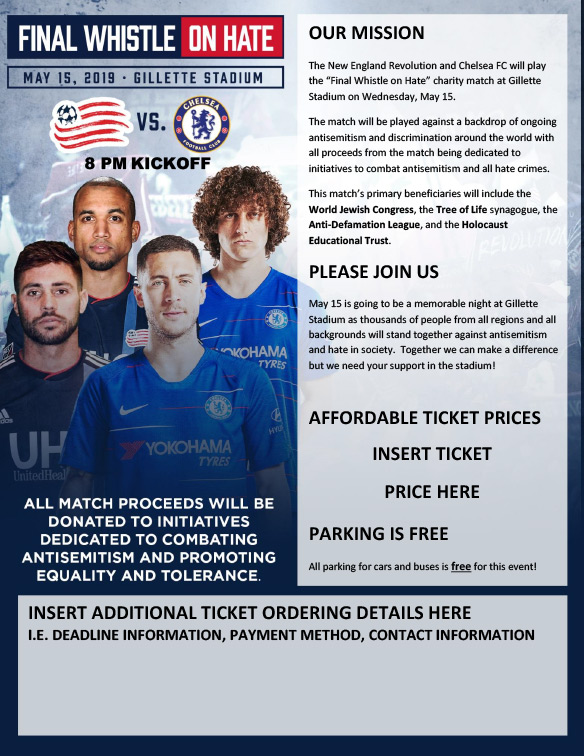 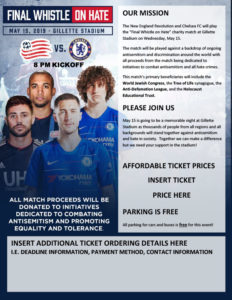 As part of a global effort to increase awareness about the need to fight antisemitism, Chelsea FC owner Roman Abramovich and New England Revolution owner Robert Kraft have agreed to organize a charity match between the two soccer teams later this year.

The match will take place on May 15 at the Gillette Stadium in Foxborough, Massachusetts, and will kick off at 8 p.m. local time.

The match is part of the “Say No to Antisemitism” campaign that combats rising antisemitism and discrimination around the world.

Tickets for the game, titled “Final Whistle on Hate,” go on sale beginning March 15. All proceeds will go toward raising funds for projects promoting equality and tolerance.

The idea behind the match is that sport brings people together. Match marketers say this event specifically is aimed at tackling prejudice and hate of all forms.

Abramovich and Kraft will each donate $1 million in support of the cause, and are planning to announce additional initiatives to combat antisemitism announced closer to the game.

The match’s primary beneficiaries will include the World Jewish Congress, the Tree of Life temple in Pittsburgh, where 11 worshipers were murdered last year, the Anti-Defamation League and the Holocaust Educational Trust.

A Special Offer for Center Makor