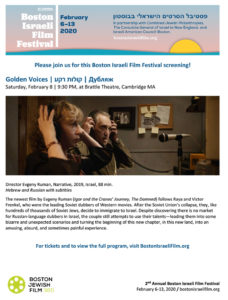 The newest film by Evgeny Ruman (Igor and the Cranes’ Journey, The Damned) follows Raya and Victor Frenkel, who were the leading Soviet dubbers of Western movies. After the Soviet Union’s collapse, they, like hundreds of thousands of Soviet Jews, decide to immigrate to Israel. Despite discovering there is no market for Russian-language dubbers in Israel, the couple still attempts to use their talents—leading them into some bizarre and unexpected scenarios and turning the beginning of this new chapter, in this new land, into an amusing, absurd, and sometimes painful experience.