Israel after the Election: The Impact on American Jews and Our Connection to Israel 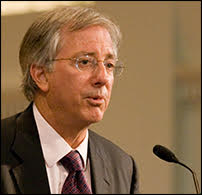 Israel after the Election: The Impact on American Jews and Our Connection to Israel

Ambassador Dennis Ross is counselor and William Davidson Distinguished Fellow at The Washington Institute for Near East Policy. For more than twelve years, Ambassador Ross played a leading role in shaping U.S. involvement in the Middle East peace process, dealing directly with the parties as the U.S. point man on the peace process in both the George H. W. Bush and Bill Clinton administrations. He is Co-Chair of The Jewish People Policy Institute.

Presented by the Hornstein Jewish Professional Leadership Program and the Initiative for Jewish Identity at the Cohen Center for Modern Jewish Studies and cosponsored by the Schusterman Center for Israel Studies.