American Jews & the State of Israel: As One or Divided? 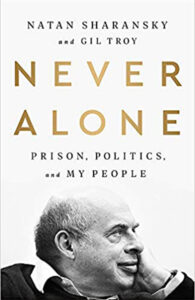 American Jews & the State of Israel: As One or Divided? Natan Sharansky and Gil Troy in conversation with Jonathan Sarna and Shirley Idelson, based on the book “Never Alone”

Co-hosted by the Office of the President

Natan Sharansky is one of the most famous former Soviet refusniks and an Israeli politician, author and human rights activist.  Read more.

Gil Troy is a Distinguished Scholar in North American History at McGill University, currently living in Jerusalem, and an award-winning American presidential historian and a leading Zionist activist. Read more.

Rabbi Shirley Idelson is Leon A. Jick Director of, and associate professor in the Hornstein Jewish Professional Leadership Program at Brandeis University.