Alexis is the grandchild of four Holocaust survivors from Hungary and Czechoslovakia. Berzi, her paternal grandmother, often repeated the following: “Even if you spent just 30 minutes in Auschwitz and then went back to living a life of total luxury, you would never, ever forget.”

Alexis never knew her grandfathers. Her maternal grandmother died when she was 10. So it was Berzi and her sisters’ experience (5 out of 6 of whom survived Auschwitz) that had the greatest impact. Alexis is honored to share pieces from all four of her grandparents’ wartime experiences, as well as the effect their legacy has had on her life and career. 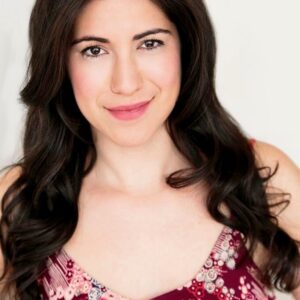 Alexis Fishman
Born in Sydney, Australia, Alexis is the grandchild of four Holocaust survivors. She has lived in New York since 2008. Shortly thereafter, she discovered 3GNY and was a proud member of the board and co-chair of the education committee from 2015-2019.

Alexis is an actor and singer. She is recognized as one of Australia’s leading ladies of musical theatre, performing there in major musicals and earning a Helpmann nomination (Australia’s Tony Award). Since moving to New York she has continued to perform extensively off-Broadway and has also made a splash in cabaret — writing and producing six solo shows since 2014 that have earned critical acclaim and toured both the United States and Australia. Alexis is also a producer at Moira Blumenthal Productions, Australia’s premier Jewish theatre company and a Jewish educator for Lab/Shul, based in New York.