Alison will share the story of her maternal grandmother, Anna Kohn, who grew up in Hungary and worked in the small matzo factory her family owned, which was right next to their home. Anna learned the mechanics of the factory and worked there while attending higher-level schooling in the nearby city as she studied to become a surgeon.

Late into the war, Anna was separated from her mother and taken from her home. She was held in a ghetto and transported to Auschwitz before being sent to Sachsenhausen to work at a Nazi airplane factory. With instincts, faith, and a strong will, she was able to not only survive, but rebel in small but lifesaving ways. 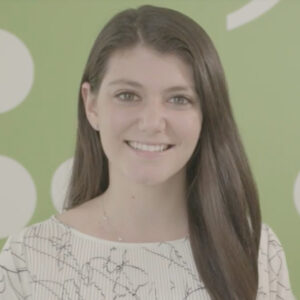 Alison Berg
Alison Berg is the granddaughter of two Holocaust survivors, and grew up in New Jersey minutes away from the chicken farm her grandparents owned upon arriving in America. She graduated from the University of Michigan with degrees in Communications and Political Science, and now works as a director at a communications firm specializing in nonprofit clients — using storytelling to advocate for meaningful causes and enhance their impact.

After hearing stories in pieces over the years, Alison joined WEDU in January 2019 and put the full narrative of her grandmother’s life together to share with students. Her participation in the program was inspired by a conversation with her little sister in the BIg Brothers BIg Sisters program, who was shocked to learn she was just one degree of separation from a real survivor, and that someone from that historical period could still be alive.

Alison hopes her participation in 3GNY helps students more easily connect to the not-so-ancient history, realizing what hate and intolerance is capable of destroying, and what faith and love is capable of surviving.