Artsakh: the Cry from the Mountains 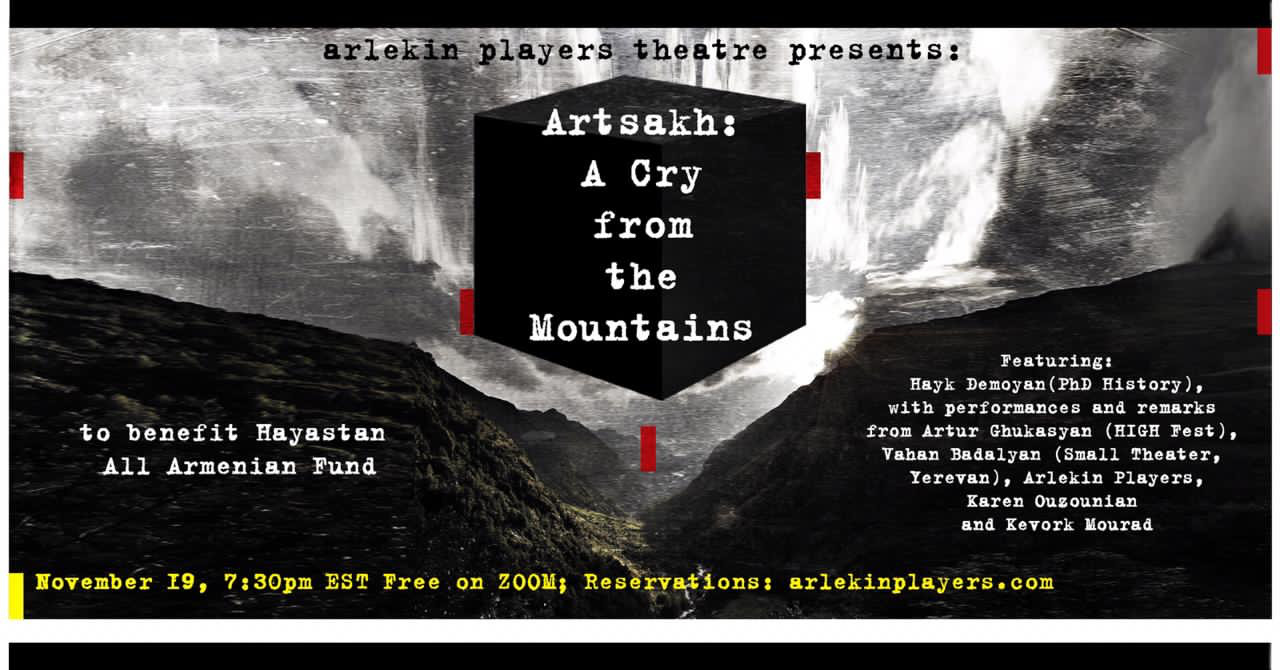 ARTSAKH: THE CRY FROM THE MOUNTAINS

An Evening Dedicated to Armenia

Needham, MA – Arlekin Players Theatre, co-producer Sara Stackhouse of BroadBand Collaborative, and presenting partner Cherry Orchard Festival in NY, will present an evening dedicated to Armenia, featuring  Hayk Demoyan, Director of the Aurora Prize and former director of the Armenian Genocide Museum-Institute.  The evening will include additional performances and remarks from Arthur Ghukasyan of HIGH FEST International Performing Arts Festival, Vahan Badalyan of the National Centre of Aesthetics and Art Director of Small Theatre in Yerevan, cellist Karen Ouzounian, artist Kevork Mourad and members of the Arlekin Players Theater Company. The event will take place on Thursday, November 19 , 2020 at 7:30pm on ZOOM.

Tickets are FREE with reservation. Donations encouraged to benefit Hayastan All Armenian Fund. For more information or to reserve a Zoom spot, visit arlekinplayers.com or call (617) 942-0022.

“We are humbled to host this incredible group of Armenian artists and thinkers to share their stories and perspectives with us. We are coming together to raise awareness and raise critical funds to support efforts for peace in Armenia,” says Golyak. “The world needs to step in. This cannot and should not happen in the modern times. Let’s please stop the war.”

Arlekin Players Theatre was created in Boston in 2009 and has since toured to New York, Chicago, and Hartford, as well as to international festivals in Russia, Armenia, Ukraine, and Monaco. It’s current international virtual tour of State vs Natasha Banina continues to receive World-wide acclaim, including the New York Times Critics’ Pick, and has performed for audiences in 40 US States and in 16 countries. Arlekin has received multiple awards for its work including four 2020 Elliot Norton Awards from the Boston Theater Critics Association for its recent productions of The Stone and The Seagull. Alekin takes strong pride in their emphasis on self-identity; they are a company of immigrants performing works that play on the ideas of cross-culture, home, and traditions, challenging the idea of nationality, and finding common themes that unite us all. The company makes its home in Needham, MA. For more information, visit www.arlekinplayers.com.

Igor Golyak (Arlekin Founding Artistic Director) received the 2020 Elliot Norton Award for Outstanding Director for Arlekin’s The Stone and was also nominated in the same year for his direction of Arlekin’s The Seagull . He is an Associate Professor at the Boston Conservatory, and has spent over a decade teaching the art of theatre. He is the founder of the Igor Golyak Acting Studio and Artistic Director of Arlekin Players Theatre which has won numerous awards in the United States and internationally. Arlekin Players Theatre is a multicultural, multi-national collaborative that is growing year to year in the number of audience members, company actors, and volunteers. His theatre has been invited to perform on famous stages and at world-renowned festivals all over the world, including Moscow Art Theatre, and festivals in Yerevan, Armenia, New York City, Chicago, Lviv, Ukraine, Monaco, and many others.

Hayk Demoyan (speaker) Dr. Demoyan was born in the city of Leninakan (now Gyumri) in Soviet Armenia in 1975. He is a graduate of Yerevan State University (1998) and received his degree of Doctor of historical sciences from the Armenian National Academy of Sciences in 2012. From 2002 till 2005 he was a lecturer at the History Department of Yerevan State University. The sphere of research interests of Hayk Demoyan includes such topics as the Armenian Genocide, Turkish foreign policy and Turkey’s involvement in the Nagorno-Karabakh conflict. Dr. Demoyan is author of 15 books (among them “Armenian Genocide: Front page coverage in the world media”, Yerevan, 2014, (in Armenian, in English, in Russian and in French), “Foreign Policy of Turkey and Karabakh Conflict”, Yerevan, 2013 (in Russian), “Armenian Sports and Gymnastics in the Ottoman Empire”, Yerevan, 2015, 2015, “Western Media Coverage of the Nagorno-Karabakh Conflict in 1988-1990” (in English), Yerevan, 2008) and of about 40 academic articles.

From 2006 to 2017 he was the Director of the Armenian Genocide Museum and Institute (AGMI) in Yerevan, Armenia. From 2011 to 2015 Hayk Demoyan was the Secretary of the State Commission on Coordination of the events dedicated to the commemoration of the 100th anniversary of the Armenian Genocide. From 2017 to 2018 Dr. Hayk Demoyan was a US Fulbright visiting scholar at the Davis Center for Russian and Eurasian Studies of Harvard University to research the identity transformation processes in the South Caucasus.  In 2018 he published his new book “Armenian Legacy in America: 400-year heritage” dedicated to the arrival of the first Armenian in Virginia back in 1618. In 2019 a new book “Armenian churches and monasteries in the international postcards” was released. Currently he is chairman of “Gyumri 20/25” foundation which aims at establishment of the Museum of the Armenian photographic art, Museum of Armenian women and Armenian sports museum in Gyumri within 5 years.

Artsakh: The Cry from the Mountains – An Evening Dedicated to Armenia

Event: Artsakh: The Cry from the Mountains – an evening dedicated to Armenia