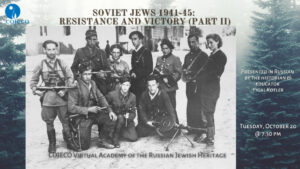 This session will be presented in Russian and is dedicated to the most tragic events in the lives of the Soviet Jews of the 20th century – the Holocaust. Einsatzgruppen, local police, mass executions, life in the ghetto, and liquidation will unfold in front of our eyes. But, as importantly, we will talk about the struggle of the Jewish people for their lives and dignity.