Elyse will share her grandmother’s amazing story of survival, including escaping death at Auschwitz more than once. Elyse’s grandmother, Yolan (Moldovan) Lichtman, was the 10th of 11 children and lived in the rural farming village of Satu Mare, Romania, on the border with Hungary. More than half of Yolan’s family died during the Holocaust, but Elyse’s grandmother and one of her sisters managed to stay together the entire time and after liberation they returned to their village where Elyse’s grandmother incredibly reunited with her husband (Elyse’s grandfather).

Elyse’s grandmother did not speak in detail about her experience until Elyse was old enough to ask about it. Her grandmother publicly told her full story only once, to Elyse’s 8th grade class during their study of the Holocaust, prior to passing away one year later. 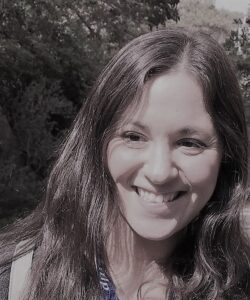 Elyse Wolff
Elyse is the granddaughter of two Holocaust survivors.  Her mother’s father and mother both survived the war. Knowing that she is a descendant of survivors has greatly impacted Elyse’s life.

In addition to continually studying the Holocaust, Elyse has served as an appointed commissioner to the New Jersey State Commission on Holocaust Education since 2017. The Commission’s core mission is to promote Holocaust education in New Jersey and assist educators with various aspects of meeting the New Jersey state mandate to provide Holocaust and genocide education to all students. Elyse is one of the three co-founders of 3GNJ, a NJ-based group of grandchildren of survivors who are passionate about ensuring that their family members’ stories of survival are not lost or forgotten. 3GNJ has partnered with 3GNY for various events.

Elyse holds a BS from the University of Maryland and a JD from Rutgers University for law school. She is currently an assistant general counsel at Catalent Pharma Solutions in Somerset, New Jersey.

She married her husband Keith Wolff in 2007 and they have 2 daughters, Dara, age 9, and Hailey, age 5, and reside in Martinsville, New Jersey.