Leonid Ptashka and His Band 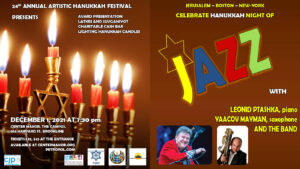 Jazz lovers of Boston are thrilled and excited for a whirlwind of rhythm. Incomparable Jazz maestro, pianist, composer, showman Leonid Ptashka is coming to town! You will spend an unforgettable evening, filled with the vivid colors of jazz.

Those who want to listen to the concert in the comfort of their own home can do so at a discount – follow the same link and choose a Zoom ticket. You will receive your link 30 minutes prior to the event. Please note: all online ticket sales end at 5:30 p.m., December 1.

Leonid Ptashka, pianist and composer, was born in 1964 in Baky. He began to study piano at the age of 4, at the age of 14 he started performing at a professional scene. Finished Gnessin Academy of Music in Moscow he spread far beyond in the Russian Jazz circuit. His debut album Flight of Fantasy (1984) was a massive seller by jazz terms. Taking jazz into the worlds of ethnic jazz and improvisation on traditional main-stream, Ptashka has established himself as a virtuoso instrumentalist, a brilliant performer and an artist passionately committed to his music. Through the years, combining acoustic piano, electronics and synthesizer keyboard instruments, he has refined his expressiveness and developed an impressive technique. Performing as a soloist Ptashka played Recital concerts all over the world, including solo recital in Carnegy Concert Hall New York (1988), Boston University Concert Hall (1988), Los Angeles Country Museum of Art (1989). Later on Leonid Ptashka continues his concert tours in France, Yugoslavia, West Germany, Italy.

The intensive concert appearances were combined with musician’s participation in big jazz contests. By the year of his immigration to Israel (1990), Ptashka had received 17 national awards in Jazz. At the international Pianist contest in Kalish, Poland (1987) Ptashka was the first Soviet jazz pianist who was awarded the second prize and got the main award of the Pagart Record Company. He won the first prize in the Pianist Competition in Los Angeles (1988), the special prize at the Jazz Pianist Competition in France (1989), and the first prize in Eilat Jazz Festival in Israel (1991).

Leonid Ptashka recorded and produced 7 records in Russia, USA (Mobile Fidelity Company), Israel 1996 (NMC Company) (see discography). Immigrated to Israel he immediately joined the forefront of the Israeli Jazz scene, performing, teaching and conducting. Since then he has formed and lead several bands in the country.

Leonid Ptashka is a founder & artistic director of International Jazz Festivals in Israel that are taking place since 1994 in different cities across the country . “Jazz in Winter” in 1998 , “Jazzland” in 2001, “25 years & only Jazz” 2002 (see productions) were the most unforgettable ones .

In 2000 he was included into the prestigious list of “100 outstanding musicians of the 20-th century” that was combined by the American Biographical Institute.

In 2003 he received The Medal of Israeli Parlament- Kneset as a state recognition of his achievements & contribution to the country.

Since 2003 Ptashka is a host of popular international television Music Show “ The Night Bird” (Ptashka in Russian is a bird) (See The Night Bird). 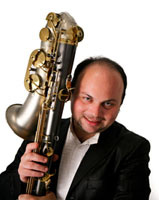 Originally born in Moscow and hailing from Israel, for the past 9 years Yaacov Mayman has been contributing his unique musical voice to the vibrant New York Jazz scene, equally earning high praise, as from his peers and musical critics, as from his multi-faceted audience. He has recently released his highly acclaimed debut album “Watercolors” that features some of the most prominent and re-known Jazz musicians today, such as trumpeter Alex Sipiagin and bassist Boris Kozlov. Yaacov has been indulging audiences nationally and internationally in his fascinating performances with powerful, warm sound, dazzling virtuosity, daring interaction and outstanding musicality, accompanied by an impeccable lineup of hard-swinging and powerfully driving rhythm sections.

Yaacov Mayman is a many-sided composer, whose music incorporates his strong influences by John Coltrane and Dexter Gordon, his deep roots in Be-Bop and his exposure to World, Israeli folk and Classical music into one fresh, unique and original style, full of punchy, unpredictable rhythm riffs, inspiring melodic twists and touching lyricism, all above breath-taking metric kaleidoscope.

His quartet has been conquering audience’s hearts, leaving listeners on the tips of their toes all the way through his exciting performances around USA and abroad and is currently maintaining a busy tour schedule, making New York City its home.