We’re writing to inform you that, in view of the situation in Ukraine, Winter Extravaganza has been canceled until better times. Let us hope they will come very, very soon. We will issue refunds promptly. Let us hope will will be able to .

Thank you for understanding! 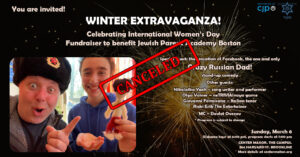 Special guest: the sensation of Facebook, the one and only
Crazy Russian Dad!
stand-up comedy

Crazy Russian Dad is a Russian immigrant in America who is a popular YouTuber, blogger, and comedian. He doesn’t disclose his real name and is instead known by his personality name, ‘Crazy Russian Dad’. On YouTube he has 26k subscribers with a growing online influence on Facebook and on Instagram, he has over 200k followers. His aim is to make you smile about life in America and he is renowned for his comedy. His videos can be about adapting to life in a new country, complaints about children and schools, comparisons with life in the USSR, making fun of Russian stereotypes such as vodka drinking or cold weather, and lessons in Russian cooking, he has many fans around the world. 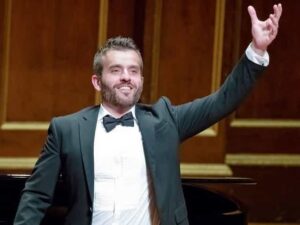 A native of Torre del Greco (Naples, Italy), Giovanni Formisano has been called, “Truly an Italian tenor in the grand tradition.” He has received high praise for his interpretations of the Italian lyric tenor repertoire, with a special affinity for the classic songs from his native Naples.

Winner of the “Talents of the World” voice competition in Boston and recipient of the Emerging Artist Award from the St. Botolph Club Foundation, Mr. Formisano was featured in a tribute concert in honor of the legendary baritone Dimitri Hvorostovsky at Carnegie Hall, alongside renowned mezzo-soprano Nino Surguladze and many others.

His operatic and concert appearance include the tenor solo in Beethoven’s Ninth Symphony with the Cambridge Symphony Orchestra, Don José in Carmen with the Commonwealth Lyric Theater, the tenor solo in Verdi’s Requiem with the Paul Madore Chorale and Salem orchestra in Salem MA, Alfredo in La Traviata with Opera Providence, The Young Gypsy in Rachmaninoff’s Aleko with the Commonwealth Lyric Theater, Camille in The Merry Widow with Opera Providence, and Rodolfo in La bohème with Boston Opera Collaborative. Mr. Formisano’s past roles include the tenor solo in Beethoven’s Ninth Symphony at Amherst College, Nemorino in L’elisir d’amore with Center City Opera Theatre in Philadelphia and Opera del West, Arturo in Lucia di Lamermoor with Commonwealth Opera, Cavaradossi in Tosca with the Lowell House Opera, Pong in Turandot with the Connecticut Grand Opera and Lowell House Opera, Spoletta in Tosca with the Cape Cod Opera and the Ruggero in La rondine at the Longy School of Music.